It is said that assumptions are the mother of all failure (and wishful thinking may very well be the father). I did not, until very recently, recognize that all these years I have been operating based on an assumption that, unfortunately, proved wrong.

Where did it all start? Pinpointing the beginning of my Lean journey seems arbitrary but a chain of events through 1997, 1998 stands out. So in my introductions I use that as my starting point. Since then I learned a lot about continuous improvement and Toyota has always been my source of inspiration. I learned about Lean and read that it was the name given by John Krafcik to describe the superior practices that they found at Toyota during the 5 year Study On The Future Of The Automobile in the 1980’s.

Why did this 5 year study start in the first place? In the early 1980’s there was a lot of compounding tension between Japanese companies and their competitors in the US and Europe. The Japanese were outcompeting their competitors and in the west trade barriers were erected to protect their own production. The researchers thought the better way forward would be to learn from the Japanese instead of fighting them.

After their study the researchers believed that Lean would become the world standard of operation in the 21st century and they hoped it would because “that world will be a very different, and a much better, place.” They started the Lean Enterprise Institute to help facilitate this transition.

So, in my head there is this assumption about the purpose of Lean. For me the purpose of Lean is to become as successful in a given industry as Toyota is in the automobile industry. The goal of the study that resulted in coining the term Lean was to find out why Japanese companies, and Toyota in particular, got way better results than their western counterparts with the intention to replicate their success.

I think this assumption about the purpose of Lean still stands firm. I have always operated based on this assumption in my attempts to help clients achieve extraordinary, Toyota style, success in their own field of operation. But in doing so I met many obstacles. Although in many cases we were able to achieve initial successes, those successes rarely sustained. That is not Toyota style success. At Toyota improvement is more continuous and I started wondering why that part was so hard to replicate.

I was not the only one noticing this problem. Many had, and still have, similar experiences. So, I studied more. I learned about Toyota’s management practices from Mike Rother’s research. From his book Toyota Kata I learned that Toyota not only uses all kind of tools but also has management practices in place to teach people the skills they need to continuously improve. I was so enthusiastic about Mike’s research that I devoted my time learning and teaching these practices since 2010.

But still I encountered the same problem. Even with the awareness of the improvement skills that we need to build in our businesses to replicate Toyota’s success in our organisations, it rarely happened. I wondered what was going on. I sensed that we still did not understand the root cause of Toyota’s success. So, I studied more.

In Toyota Kata Mike Rother writes about the Improvement Kata. It is a four step model to describe the basic thinking process Toyota uses to achieve their continuous improvement. The first step of the Improvement Kata is called “Understand the Direction.” During my work with clients I started zooming in on this step: what is the direction of improvement that my clients pursue? Slowly it started to dawn on me…

I also kept studying Toyota. I learned about The Toyota Way 2001. It is a little booklet of seven A3’s that took 2.5 years to compose under the lead of Mr Fujio Cho, President of Toyota Motor Corporation at the time. The reason for this effort was because Toyota encountered a similar kind of obstacle. Since the early 1980’s Toyota has expanded its operations beyond Japan and grew into an ever bigger organisation employing ever more non-Japanese. Their initial implicit teaching methods could not be sustained because there were not enough Japanese teachers to support this rapid growth. A more explicit way of teaching was needed so the values and business methods that had been passed on as implicit knowledge were identified and defined in 2001 and taught to all their employees.

In The Toyota Way 2001 two pillars are presented. The first one is Continuous Improvement. The second one is Respect for People. Underlying these two pillars are five keywords which are referred to as their Moral Foundation. The first keyword is Challenge.

Learning this I started to see a pattern with my clients. What is the direction of improvement that my clients pursue? How big are their challenges? What I found was that many clients do not challenge themselves as Toyota does. The hypothesis that I built about the root cause of stagnating improvement efforts still stands strong. I think the root cause is lack of a proper challenge.

So I started querying my clients. What is your challenge? What do you want to improve? What is your definition of better? What does good look like? Why is that important? What is the higher purpose?

Many of my clients have extensive Lean programs and continuous improvement specialists on their payroll. They invested heavily in Lean and continuous improvement but asking the questions above did, in many cases, not result in clear answers. Many people are “improving” without a clear, and shared, picture of what good looks like. For me it is no wonder they struggle…

Once I made this issue clear to my clients they did not jump up in joy. Creating this kind of clarity and ambition was rarely the way forward for them. I started wondering why. Why do you do all these investments to improve? Why do you learn about Lean but don’t you want to follow Toyota’s example? And then it hit me like a bullet train.

My assumption has always been that organisations investing in Lean want to follow Toyota’s example and achieve similar success in their business. I was wrong. I also never clarified this assumption and never checked with my clients if that is what they were after. I was just unaware of this assumption, but always acted based on it. Needless to say that got me in all kinds of trouble and may very well be my biggest Lean Failure. Ever.

So what is it that most organisations are after when investing in Lean? I think the prospect of the “problem solving” aspect of Lean is very appealing. Many organisations experience problems and are looking for solutions. I think it is the solution to these problems they are after. They want less problems.

Wanting less problems will never bring you continuous improvement. For improvement to be continuous you will need a constant stream of problems to work on. That is why the keyword Challenge in The Toyota Way 2001 is so important. Challenge is not so much about “problem solving” but way more about “problem creation”. Obviously “problem creation” has a negative connotation so Toyota uses words like Challenge, Long Term Vision and Dreams to describe what they are after. What it essentially does though is to create a deliberate gap between what they want and what they currently can do. That gap is the lean definition of a… problem.

So, here I am. I learned a lot and now I am in doubt. What should I do next? Is my assumption about the purpose of Lean wrong? Is Lean not about becoming as successful in your business as Toyota is in theirs? Should I abandon my dream of helping organisations achieve true continuous improvement? Should I focus on “problem solving” instead? Or should I look for organisations with dreams, organisations that find “conscious problem creation” an attractive way to run their business? I think I could use some wisdom. Always good to improve with some wisdom… 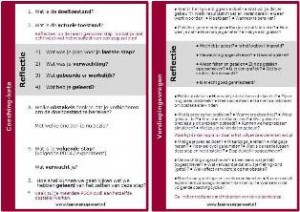